A very cold afternoon greeted players and supporters to Storey Park, Asquith for this round 15 clash. Unfortunately for Wests Magpies, they only had 3 players on the interchange bench with Ahmad Ellaz backing up from the international match between Lebanon and Fiji the night before. He was joined in the Cedar team by fellow Wests Magpies player Jayden El-Jalkh. It is pleasing to report that both men had strong games for their country; however Jayden was unavailable for today’s game. We congratulate them on their selection to play an international game.

Wests Magpies were given the ball to commence play with good defense from the outset holding Asquith inside their own half. When they reached their last tackle a towering midfield bomb was put up and when it hit terra firma it bounced awkwardly for Wests Magpies chasers and fell into the hands of Asquith centre three quarter Shane Kiel who sprinted down the eastern side. Wests Magpies five eight Kieran Wyld gave chase and brought Kiel down just short of the line but momentum carried him into the in goal to claim his first try. Half Blake Goodwin stepped forward to take the conversion attempt which fell short. Asquith 4 Wests Magpies 0.

Wests Magpies were called on to defend their line after being penalised on half way. After taking the relieving kick, Asquith took a tap on Wests Magpies 30 meter line before searching for space both sides of the ruck without luck. On the 4th tackle, home team prop forward Magnus Stromquist received the ball at pace and crashed over the try line directly under the black dot, but he was unable to get the ball down. Wests Magpies defended the rest of the set and when in possession Asquith were penalised for holding a player down. Almost immediately Wests Magpies were penalised for an incorrect play the ball and the boys in black and white were called upon again to protect their try line; they did not falter. On the last tackle the home team kicked the ball along the ground and it bounced off a Wests Magpies players arm. The referee called for the scrum to be packed, giving the feed to Asquith. After winning the ball the home team ran to the short side and looked certain to score, but their effort was foiled by fullback Omar Slaimankhel who stripped the ball from the players grasp.

Wests Magpies players Kieran Wyld, Edward TJ Carter and Joshua Davis made their way into the home team’s territory. In good field position, the point of attack was switched by half Kelsey Coakes onto prop forward Avia Minute who carried three players over the line with him; unfortunately he could not get the ball down. Wests Magpies then spread the ball to the western side of the field, but the last pass went to ground.

After winning the scrum Asquith players moved the ball over the half way before being met by Wests Magpies players Harrison Leonard, Ahmad Ellaz and Avia Minute whose defensive efforts forced the ball to ground. After winning the scrum, an Asquith player was penalised for a high shot. Kelsey Coakes gained good ground with his kick before the ball was thrown to a charging Joshua Davis who wrestled his way over the try line only for the referee to call that he had been held up. Sadly Joshua injured his leg in the tackle and took no further part in the game. After his replacement took the field, the visitors only had 2 fresh players on the interchange bench. Not long after this, prop forward Avia Minute left the field after a head knock reducing the bench to one fit player.

Not to be deterred and when back in possession fullback Omar Slaimankhel threw a great pass to second row forward David Minute who made a lot of ground up the middle of the field. At the end of the set a grubber kick into the home teams in goal area was played dead. Despite receiving the ball from the kick, Wests Magpies were unable to find a way across the line during the remainder of the set.

Asquith then received three quick penalties which saw them set up on Wests Magpies 10 metre line. This time they would be rewarded with their second four pointer when second row forward Jordon Ah-One Remfrey threw a flat pass to Atonio Pelesasa who crossed adjacent to the uprights. Half Blake Goodman increased his team’s lead with a successful conversion. Asquith 10 Wests Magpies 0. This would bring the first half to an end.

The second half got underway with the intensity from both teams unchanged. Wests Magpies prop forward Avia Minute and David Minute carried play to the home team’s 30 metre line. On the last tackle fullback Omar Slaimankhel put through a chip kick which was knocked back by half Kelsey Coakes into the hands of wing three quarter Isaac Rabuatoka who scored in the eastern corner. Coakes kick at goal fell short. Asquith 10 Wests Magpies 4.

Receiving the ball from the restart, prop forward Edward TJ Carter combined with hooker Dean Robson to cross into Asquith territory. Wests Magpies momentum was stopped due to the unfortunate injury to an Asquith player who after treatment resumed his position in the team. When in possession the home team ran to both sides of the field trying to break the defensive line but good work from hooker Dean Robson, lock forward Harrison Leonard and props Avia Minute and David Minute repelled every attack and forced the home team to kick on the last well inside their half. With ball in hand Wests Magpies were penalised. The home teams offensive runs took them down field at which time their half Blake Goodman tipped the ball onto centre three quarter Shane Kiel who crossed for his second try of the afternoon. Interchange player Mathew Place claimed the extras which put Asquith up 16 points to Wests Magpies 4.

All of Wests Magpies players continued to throw everything into both attack and defense but were not rewarded for their good work. Prop forward Hala Akauloa Laula, Dean Robson, Harrison Leonard and Ahmad Ellaz kept pushing forward but could not get through the home teams line. Towards the latter stages of the second half prop forward David Minute ran hard before offloading to his front row partner Edward TJ Carter who crossed the try line, only to be told he did not force the ball. In the 37th minute Asquith scored for their 4th try of the day when play was spread wide by interchange player Mathew Place onto centre three quarter Joshua Fraser who scored in the eastern corner. The attempt at goal was waved away. This would be the last play of the afternoon. Asquith 20 Wests Magpies 4.

Although Wests Magpies went down in this encounter, they received warm applause from both sets of supporters as they left the field. All of their players put their hands up do their share in both attack and defense, but the injury toll and with two fresh players on the interchange bench this encounter was always going to be difficult.

This week’s best on ground were selected by staff and supporters. Their votes just shaded a number of other players. Dean Robson, who was playing a full game for the first time made several probing runs and defended stoutly whilst Harrison Leonard was a standout and Jack Gibbons caused headaches for the home team everytime he touched the ball. Although the boys did not win the game, Wests Magpies club song rang out strong and loud in the dressing room. The coaching staff and players remain very positive and look forward to playing the remaining rounds before the finals. MFFM Steve Reeves.

Scorers for Wests Magpies: 1 try to Isaac Rabuatoka. Kelsey Coakes missed his only shot at goal.

Scorers for Asquith: 2 tries to Shane Kiel and 1 each to Joshua Fraser and Atonio Pelesasa. Blake Goodman and Mathew Place kick 1 goal each. 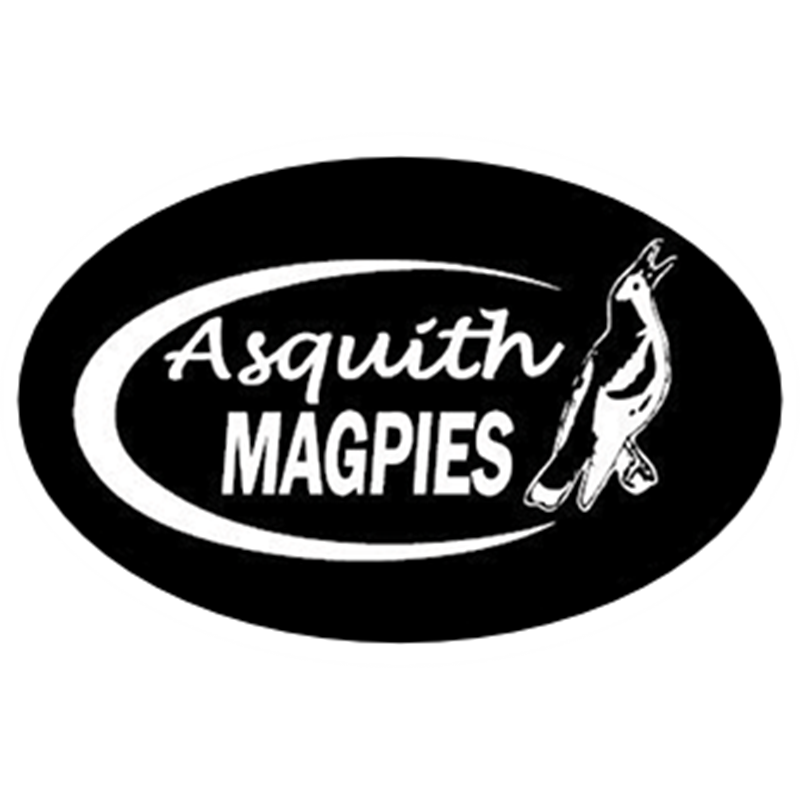