Western Suburbs Magpies are back in the winners circle, claiming a narrow win over the Blacktown Workers Sea Eagles on Sunday afternoon.

With late additions of Kane Mcquiggin, Jack Miller, Patrice Siolo and Dylan Clifford dropping down from our Canterbury Cup NSW side, the Magpies produced a tough campaign for victory and were able to seal the win with just two points being the difference in the end.

Despite losing Jack Miller and Kane McQuiggin early in the first half for HIA, as well as Ahmad Ellaz side lined for 10 minutes, Wests became resilient and relentless in both defence and attack, proving too powerful for the ‘Silvertails’.

Wests found themselves on the board first after a strong set lead by Patrice Siolo, Ahmad Ellaz and Josh Davis positioned Kelsey Coakes for a tactical last play kick. The Blacktown Workers fullback couldn't get a grasp on the halfback’s kick, fumbling the ball and opening up a scoring opportunity for Jayden El - Jalkh. Coakes successfully converted from the sideline to give the visitors a 6-nil lead after 15 minutes.

As play drifted from one end of the field to the other, with both teams successfully completing their sets, Blacktown Workers took advantage of a slip up in the Magpies attack, intercepting the ball and sprinting up field. As play continued, Coakes spotted an opportunity to return the favour, snatching a Seal Eagles inside ball, getting his team out of danger.

Unable to hold their opposition to nil for much longer, a right side raid got the best of the Magpies, with an outside ball sending Shaun Fitzgerald over in the corner. Karmen Cryer was unable to convert leaving Blacktown Workers down by 2.

A forward pass from the hosts, followed by a penalty 10 metres out provided Wests with another chance to extend their lead through Edward Carter, who busted through his defence and crashed over under the posts creating an easy conversion for Coakes.

Ahmad Ellaz found himself side lined for 10 minutes as well as on report for a dangerous tackle on a Sea Eagles forward with 3 minutes remaining in the first stanza. Now a man down, the frustration of the Sea Eagles’ possession got the best of the visitors, seeing them give away a string of penalties within 20 metres of their line. A try was inevitable at this point with Blacktown Workers scoring in the final seconds of the first half. Cryer’s conversion allowed the Sea Eagles to close in on their opponents lead, going into the sheds trailing by 2 points.

Returning to the field and still out numbered, the Wests’ defence lifted, becoming relentless in their tackles and turning Blacktown Workers away from the line despite many attempts. But again, possession gave the Sea Eagles the upper hand, taking the lead for the first time with Wests now needing a converted try to regain control of the game.

A lack of discipline gave the Magpies two repeat sets within favourable distance from the Sea Eagles line, giving Wests a much needed try, with Jack Gibbons getting the 4 pointer, proving too strong for his defence. Coakes’ conversion took the score out to 18-16.

Wests were ready to put this one to bed, a thanks to a perfectly timed kick from Kieran Wyld finding Ellaz who got a quick pass away back inside Wyld, sending the five-eighth over next to the posts. Kelsey Coakes added the extras to take the margin beyond a converted try.

The Magpies were unlucky not to have scored off the restart after winger Samuel Kimi-Loane sprinted up the sideline after catching the Blacktown kick off, with Omar Slaimankhel following suit and advancing his side closer to the line. Gibbons campaigned for a double with two attempts at the line but was turned away.

A line break from Blacktown Workers would see them score their final try of the afternoon through Maile Li who scooped up a kick from the halfback to score. But even with the addition of Cryer’s conversion, it wasn’t enough to claim the Round 14 match with the Magpies victorious leaving the final score 24-22.

Western Suburbs Magpies have scored the most remarkable of tries after the siren to steal a 16-12 win over the Newcastle Knights in their Round 14 Canterbury Cup clash today.

With the siren expiring as Oliver Clark managed a quick play-the-ball, Wests swung the ball from side-to-side on several occasions, before a towering cross-field kick from Tyson Gamble drawing an error from the Knights as Kane Bradley somehow planted the ball down before the dead ball line to steal the win.

The win moves Western Suburbs back on to the edge of the top four ahead of next week's clash against the South Sydney Rabbitohs at Campbelltown Stadium.

Off the back of a tight loss last week to Mounties, Brett Hodgson's side came out firing this week with first points in the opening five minutes but again struggled to find their rhythm and consistency with errors letting the Knights back in the contest.

On debut, it was Madden who had the first major involvement for his side with a lovely cross-field kick finding Kane Bradley, who tapped back for Paul Momirovski to open the scoring after just three minutes. Madden pushed his conversion attempt in the difficult conditions to leave the Magpies' lead at just four points.

Poor handling from Western Suburbs would gift the visitors a chance to hit back, and they soon took the lead as Kiah Cooper stepped through from the scrum.

Lino would kick truly to put the Knights in front, before adding a penalty goal just before the break to give the visitors a surprising 8-4 lead at the break.

Having given up six errors and two penalties in the first half, Hodgson's side needed to improve in the second and they began the half in near identical to the first as both halves combined to send Momirovski over for his second try of the game.

Madden's strong sideline conversion in the rain put Wests back in front by two, but the lead would be short-lived as another Lino penalty goal erased the deficit.

Lino's third penalty goal of the afternoon with 10 minutes remaining put Newcastle back in front by two points, before a late surge from Western Suburbs gave them three consecutive sets of attack on the Newcastle line to try and win the game, with Bradley's effort after the buzzer securing the two points for the Magpies. 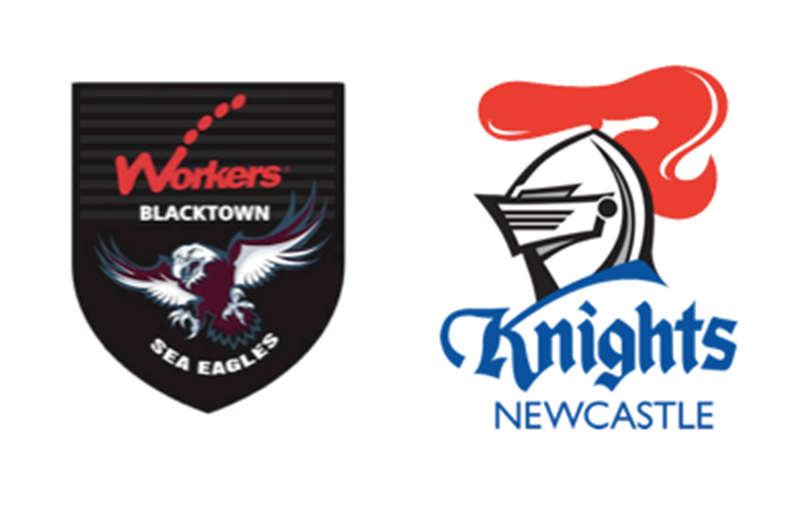