Ahead of this Sunday’s return to Lidcombe Oval against the South Sydney Rabbitohs, we’re proud to celebrate two foundation club legends as our NSW KOE Cup Wests Magpies take on South Sydney.

With thanks to the Wests Archives, take a short look at how these two crossed paths in the late 1960s.

In the very first round of 1967, Wests and Souths faced each other at Pratten Park, Ashfield. The two club legends came face to face when Sattler caught Kelly with a "frightening tackle" in which Ned's head collided with the ground, hitting hard to the point that many of the seasoned forwards on the ground were initially fearful that Kelly could die.

Kelly pulled through however, and although Kelly was still having difficulty with his head injury six weeks later, he wouldn't entertain the idea of retiring. Kelly was back for the second round club game (a Sunday at Sydney Sports Ground on June 11th) and had his sights set firmly on the end of year Kangaroo Tour.

By the end of 1967, both Kelly and Sattler made the squad for the end-of-season Kangaroo Tour. It was Sattler’s first tour and Kelly’s third, and the two became firm friends as the Australian side toured Australia and England.

On Sunday April 21st of 1968, Sattler & Kelly crossed paths at Western Suburbs new home ground of Lidcombe Oval for the first and only time. While Noel Kelly didn't take the field, he did coach the side that day, while John Sattler took the field in the #11 jumper.

Souths won on the day 21 points to 11, but might not be so lucky this Sunday afternoon, almost 54 years to the day of this encounter.

We look forward to seeing you celebrate the long history that our clubs share together this Sunday April 24th at Lidcombe Oval!

Tickets are $10 at the gate and $5 for aged pensioners
Free Entry for Kids U/16, Wests Magpies, Wests Tigers and RAS Members

Get your membership here today to ensure free entry at all Lidcombe Oval home games. 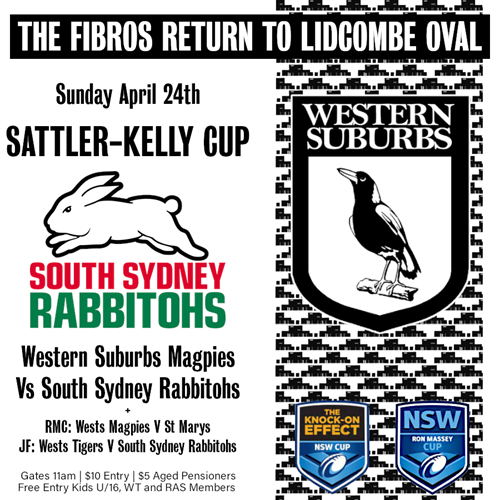