This Sunday 29th May we’re proud to host the Tom Raudonikis Cup match against the Newtown Jets at our home ground of Lidcombe Oval. We celebrate our mutual club legend every time we face off in the NSW Cup, and are pleased to go back around for another one at Lidcombe for a uniquely special event in 2022. After Tommy’s passing in 2021, Cumberland Council will be honouring Tom Raudonikis by renaming the famous Lidcombe Oval grandstand in his name. As we look forward to the day, we’ve engaged the Wests Magpies Archivists to help us look into the great history between the four great institutions we’re honouring on Sunday: Lidcombe Oval, the Western Suburbs Magpies, the Newtown Jets, and of course, the great Tommy Raudonikis.

When Tom Raudonikis made the decision to sign for the Newtown Jets for the 1980 NSWRL season, he’d played 201 first grade matches for the Western Suburbs Magpies and established himself as a legend of the game during the great Fibros V Silvertails wars of the late 1970s. In the lead up to his Newtown years, Tommy took on his future club at Lidcombe Oval in 1977, captaining the Magpies to a slim 19-18 win in Round 11, but was missing in a big win over the Jets when Newtown returned in 1978. In his final year for the Magpies, coach Roy Masters moved Raudonikis to lock to accommodate upcoming halfback Alan Neil, as they took on the Jets at Lidcombe, and won 21-4.

In 1980, Raudonikis took a big offer from Newtown to switch clubs alongside teammates Graeme O’Grady and Steve Blythe, and he was to return to Lidcombe surprisingly quickly. The 1980 Craven Mild pre-season competition was the first game that Tommy would play against Wests at Lidcombe, losing out to the Magpies in a hard-fought 22-13 Western Suburbs win.

As the season progressed, Raudonikis missed out on one chance to take on his former teammates at Lidcombe, with Tommy away on Test duty for the Kangaroos tour of New Zealand. In their absence, the Magpies defeated the Jets in all three grades.

However, when Wests went up the road to Henson Park later in the season, the Jets came back from a 20-7 deficit to win 23-20 on the back of Tommy’s leadership. Magpies director Rick Wayde commented that “it was one of the finest and most relentless games that I ever saw Tommy play.” While Raudonikis and O’Grady visited the Wests changeroom after the match to wish them well, the Magpies would miss out on the minor premiership by just two competition points, with this match pointed to as an opportunity gone missing.

In 1981, Tommy led Newtown to a miserable 12-12 draw at Henson Park, in a match riddled with errors and penalties on a wet day in Marrickville. If the fans were hopeful of a more spritely Raudonikis performance in their Lidcombe Oval clash on June 28th though, they were to be disappointed by the decision of the perennially perverse Warren Ryan, who dropped Tommy to reserve grade, thus denying him any chance of Test selection against the touring French side. Tommy's stay in seconds was then aggravated by a suspension, where (somehow!) he was to receive his only send off in his entire Sydney rugby league career. Ryan’s selections on the day backfired however, and the Magpies won comfortably, 23-7.

That’s not to say it didn’t pay any dividends, as Tommy was soon back as Jets halfback and captain, bringing Newtown up into the top five and making their run to the NSWRFL grand final. Unfortunately, the Jets would lose 20-11 to the Parramatta Eels, just a couple of years before Newtown was expelled from the competition.

All-in-all, Tom Raudonikis played 201 first grade matches for Western Suburbs, 37 for Newtown, and 6 for Brisbane Brothers. He represented NSW in 24 matches (including running out at the first ever NSW State of Origin Captain in 1980) and 29 test matches for Australia. In 1995, Raudonikis moved from Brisbane to Campbelltown to coach the Magpies from 1995-1999. He was the last ever first grade coach of Western Suburbs before the joint venture with Balmain Tigers created the Wests Tigers in 2000.

Tommy passed away on April 7th of 2021. On March 23rd, 2022, his ashes were sprinkled at the Lidcombe Oval site by former coach Roy Masters and Tommy’s son Lincoln.

At 12:30 this Sunday May 29th, Cumberland Council will further honour the great Tom Raudonikis, by renaming the historical grandstand at Lidcombe Oval: The Tom Raudonikis OAM Stand.

We look forward to seeing you this weekend for the 2022 Tom Raudonikis Cup!

A reminder that if you're interested in the history of Western Suburbs Magpies, you can head to our shop page and pick up a copy of 'Clouds and Dust, Buckets of Blood' an authorised history of the Wests Magpies by author Gary Lester. We have the 2015 edition for $70 + P&H, and in very limited quantities, a limited edition that's leather bound and signed by Peter Dimond, John Dorahy, Liam Fulton, Noel Kelly, Tom Raudonikis, John Skandalis, Arthur Summons and Harry Wells for $120 + P&H. 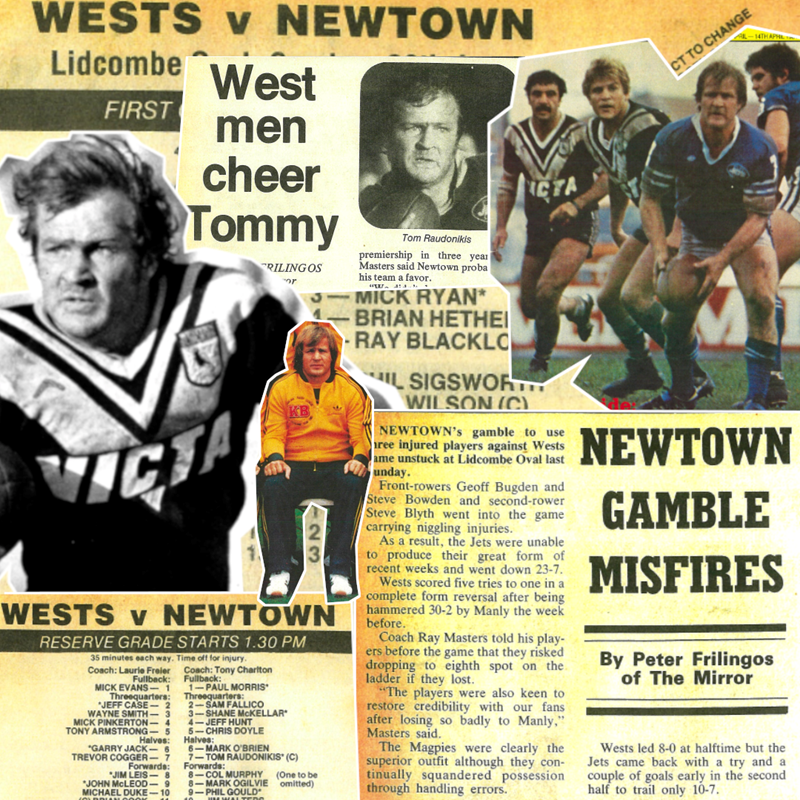