Team of the Century

WESTERN SUBURBS TEAM OF THE CENTURY

On Friday September 24, 2004 Western Suburbs honoured their greatest ever players by naming their Team of the Century. 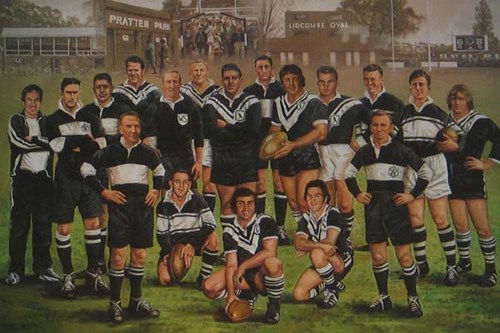 The above image is a copy of a painting of the Team of the Century that hangs proudly in the Wests Ashfield Leagues Club.

On the 20th April 1908 the first official game of Rugby League was played in the Sydney Premiership. The combatants were the Western Suburbs and Balmain. Since that time, there have been a total of 15 Premierships won between the clubs and a host of State of Origin, Kangaroo and Premiership stars produced. A wealth of legendary moments played out by some of the true legends of the game. To celebrate the history and prestige associated with two of Australia's most famous Rugby League Teams, as well as embrace their recent unification into the Wests Tigers, it is time to celebrate the

WESTS TIGERS TEAM OF THE CENTURY

A panel of judges spanning the different eras from both Clubs will select nominees according to strict criteria. The panel comprised Keith Barnes (Balmain), Kevin Humphreys (Balmain), John 'Chow' Hayes (Wests), Rick Wayde (Wests) and Ian Heads (Independent). A Western Suburbs and a Balmain Tigers team has been selected by the panel representing each club, before the unenviable task of selecting the best combined team took place.