1908 - Western Suburbs Football Club started after a meeting at Ashfield's Town Hall on the 4th of February. The club played their first NSWRFL game against Balmain at Birchgrove Oval on the 20th of April 1908. 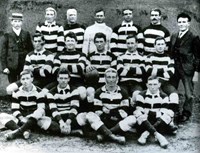 1928 - Western Suburbs officially become known as the "Magpies". Previously the players were unofficially referred to as the Cherry Pickers or Fruit Pickers due to the number of orchards around the Ashfield area. 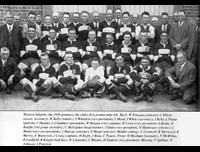 1934 - Western Suburbs win their second 1st grade Premiership defeating Easts 15 - 12 and remain the only first grade team to have gone from Wooden Spoon (1933) to Premiers in one season. 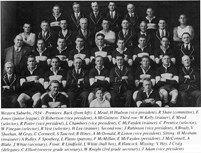 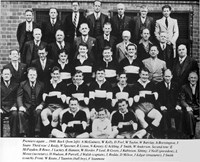 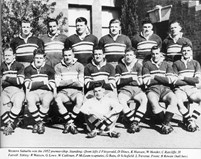 1978 - The Magpies set a home crowd record of 21,015 at Lidcombe Oval on the 30th of July against Parramatta. Western Suburbs win the 1st grade Minor Premiership. The Magpies miss out on reaching the Grand Final when a try is controversially disallowed by referee Greg (Hollywood) Hartley in a semi final clash against Manly Warringah. Tough physical clashes between Wests and Manly lay the foundations of a tribalism known as the Fibros and Silvertails. 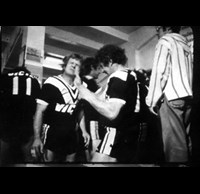 1983 - The NSWRL voted to reduce the competition to twelve clubs by excluding Newtown and Western Suburbs. Wests took the issue to court and after a long hard fight won their reinstatement.

1997 - The club stays loyal to the ARL during the SuperLeague war which tears the game apart.

1998 - The two competitions reunite under the National Rugby League, a 50/50 partnership between the ARL and News Limited. Part of the agreement requires the competition to be cut down to 14 teams by 2000.

Western Suburbs play their final first grade match against the Auckland Warriors on Sunday the 29th of August at Campbelltown Sports Stadium. Wests lose 60 - 16. The Magpies finish with the Wooden Spoon in their final year in First Grade.

2000 - Wests Tigers enter the NRL and play their first game at Campbelltown Sports Stadium on the 6th of February and come away with a 24 all draw with reigning premiers the Brisbane Broncos. Former Magpie  John Skandalis scores the Wests Tigers first ever try.

2005 - Wests Tigers win the NRL Premiership on October the 2nd, defeating the North Queensland Cowboys 30 - 16 at Stadium Australia in front of a crowd of 82,453.

2006 - Wests Tigers play in the World Club Challenge against the Bradford Bulls on the 3rd of February at Huddersfield, England. Wests Tigers lost 30-10.

2008 - Western Suburbs Magpies and Australian Rugby League celebrates its Centenary.
Wests Tigers enter a side in the new National Youth Competition which replaces the NSW Jersey Flegg competition.
Wests Magpies play Balmain Tigers in a NSW Cup match at Birchgrove Oval to celebrate the Centenary of the First Ever Premiership Game of Rugby League. Wests reverse history and win 36 - 24. 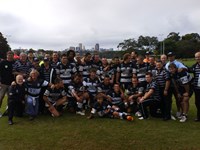 Magpie supporters hold a protest rally in Campbelltown in opposition to the club exiting the NSW Cup. The board ultimately decides to drop down to the Ron Massey Cup even though members vote in favor of staying in the NSW Cup.

2016 - Wests Group become 75% owners of the Wests Tigers after Balmain defaults on a $5.4 million loan from the NRL.

Lidcombe Oval becomes the club's home ground for the first time since 1987.